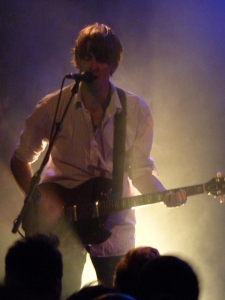 The start of a new year, what to do ? Keeping on seeing too many live shows ? Concentrating on the classics or searching for THE new band ? Not sure I know… Anyway, hope you readers will get a great year 2014 full of musical treasures.

And is there a better way to start the year with than experiencing good ol’ Stephen Malkmus on stage ? The guy has been one of our favourite for years, either through his seminal band Pavement (# 43 in our Top 100) or through his excellent solo career. This is quite amazing to realize that he has had more records under his own name now than under the Pavement banner. How time flies…

A brand new album under his belt (“Wig out at Jagbags“), Stephen Malkmus and his three compadres were back in Paris on the nice Divan du Monde stage to defend this new record. The general feeling of the rock community is that this album is once more very good but that the man will never be as important as when he was in his Pavement days. This might be true but I guess there is as well a kind of snobbish attitude there such great his albums are for those who like their weird songs with melodies and guitars (count me in!). The show was really excellent and although one could regret the absolute non-appearance of any Pavement songs, the material he has been gathering through his solo LP’s is definitely great. Singers like Paul Weller or Morrissey for instance waited years before starting incorporating Jam or Smiths songs in their set so there is hope for the future… The encore was particularly weird with two covers ; one was not a real surprise (“Beginning to See the Light” by the Velvet Underground) whereas the other one was quite unexpected to say the least… : “Stairway to Heaven” by Led Zeppelin !

Seeing again Stephen Malkmus was like meeting back a very old friend after many years : excited first to see him and checking what he has become, a bit disappointed after a few minutes to realize nothing has really changed and finally aware that such familiarity was great in the first place!